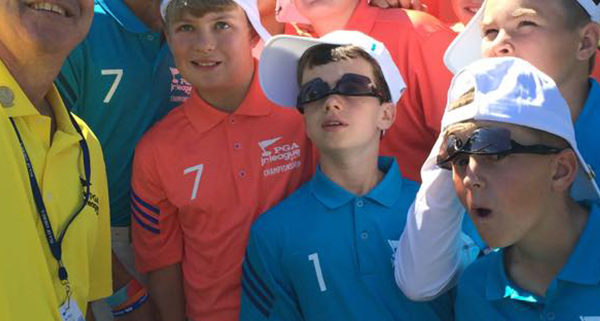 Do you want to see your junior golfer have some fun on the course?

2017 will be the third year that I have captained a PGA Junior League Golf team. I embraced the concept of PGA JLG from the beginning. I had always wanted to have an option for juniors to play golf in competitive but fun low pressure environment with their friends. PGA JLG hit it right on the head!

I have never seen young golfers enjoy the game as much as I have with PGA JLG. Parents and family also get involved in the activities by helping the captains and coaches with different duties at practices and games. Family and friends come out to watch. The golf course is full of people watching these teams play. Its kind of like Little League baseball for golf.

I have listed more information below but please check it all out at PGAJLG.

Sign Up Use your zip code to find the closest team.

Here is the basic description –

Our Joplin League of the PGA JLG still has opening for many players. Our league consists of Carthage Golf Course, Briarbrook Golf Course, Schifferdecker Golf Course and Twin Hills Country Club. We will play 6 games each. We will have practices leading up to the games to prepare all players and usually have one practice between games.

All games begin at 4pm.

Fun doppelganger pics… Who do you think looks the closest to a PGA Tour...

Enter to Win the Trip of a Lifetime for Golf and Whiskey Lovers!
Scroll to top